By the Committee for Visuel Art, 2006

Great works of art often tackle issues that we will never comprehend. Creation and destruction, love and hate. Borderline cases. Neither politics nor science subscribe to borderline cases. Science hopes that a posited thesis will be confirmed, politics that a vision or goal will be achieved. Art first recognises thesis and goal when the work is taking shape. The Tinderbox by Hans Christian Andersen cannot be told with any other words than his own.

After the collapse of ideologies, the greatest artworks hold potential for community. They hold the immeasurable and inexpressible, which makes the conversation about them free and inexhaustible
The Committee for Visuel Art

The truth is a trail that the works of art leave behind. Because art concerns life boundaries; art has, in the words of K. E. Løgstrup, breadth and concision. This means that the breadth, the space within the works, helps to make the democratic conversation less dogmatic and not fundamentalistic. Whilst on the other hand, the concision, the nuance that is necessary in order to say the unsayable, makes this common conversation slower, less arbitrary and less populistic. After the collapse of ideologies, the greatest artworks hold potential for community. They hold the immeasurable and inexpressible, which makes the conversation about them free and inexhaustible.

The committee for visual art has not spent too much time on criteria for selection of works for a canon. However, we could speak endlessly about the works themselves.

In order for a work to be canonical, the artist must have completed their oeuvre. This was the only precondition. The most recent work we have included is Jorn’s painting ‘Stalingrad’. The earliest is the Trundholm Sun Chariot. Only works that one of us especially appreciated were included.

We found that there was consensus on seven works, and then five members selected one work each. It is clear that we all five find the 12 selected works of art canonical. Equally clear is that each of us would have liked to include several more works.

And so we have 12 works of art, that five persons who have given 25-50 years of their life to visual art, would like to share through the canon and associated texts. Sophia Kalkau has written about Trundholm Sun Chariot and Thorvaldsen’s Jason with the Golden Fleece, Bjørn Nørgaard about The Union Master’s The Resurrection and Willumsen’s The Great Relief, Hans Edvard Nørregård-Nielsen about Brüggemann’s Bordesholm Altar, Saly’s statue Frederik V on Horseback and Jorn’s Stalingrad, Bente Scavenius about Eckersberg’s A View through Three of the North-Western Arches of the Third Storey of the Coliseum, Hammershøi’s Dust Grains Dancing in the Sunbeams and Ring’s Summer Day by Roskilde Fjord, and the undersigned has written about Købke’s Autumn Morning on Lake Sortedam and Noack’s Standing Woman.

The selection of these 12 artworks has the longest arm from the state in the history of the “arm’s length principle”.  There are no political, principle, or regulatory considerations involved in the individual selections and the artwork that the state exhibits as its own.

Why visual art? Is visual art not becoming passé, being replaced by a kind of life design with the Internet as media? The electronic media and virtual space are expanding more and more. Hegel believed as early as 1826 that sculpture’s time had passed and that only music could express the modern person. However, visual art remains the medium in which the meeting between the body and material can be examined. Visual art binds the culture to the space, the place and the body.

• The artists' work of life must be completed
• Only the works that one of us burned came with. It turned out that there was consensus on seven works, after which the five members of the committee could choose a work each. It is clear that we all five find the 12 selected works of art canonical. And equally clear that each of us misses more works. Back there are 12 works of art, which five people who have dedicated 25-50 years of their lives to visual arts would like to share with everyone through the cannon and the accompanying texts

Is a canon the task of the state? The fundamental question underlying the canon project is whether the English politician and philosopher John Locke (1632-1704) was right when he said: “For truth certainly would do well enough, if she were once left to shift for herself. She seldom has received, and I fear never will receive, much assistance from the power of great men, to whom she is but rarely known, and more rarely welcome. She is not taught by laws, nor has she any need of force to procure her entrance into the minds of men.”

The quote is from Locke’s celebrated “A Letter Concerning Toleration”. I do not believe that Locke is right today. In his time, the powers that be could prevent citizens from acquiring knowledge. Today, that is impossible. Today, the danger is that there are too many indifferent images and information, so that the minds of people are lost in the chaotic whirlwind of billions of pieces of information that are apparently all of equal value. The danger facing society is that Holocaust deniers, the fall of the Berlin Wall and the World Trade Center in New York are thrown around the globe along with billions of trivialities. It is this explosion of media, and in particular the Internet, that make the canon project even more relevant as a landmark.

The power of globalisation is beyond measure. Power is everywhere simultaneously. It interferes in billions of pieces of information, through incomprehensible financial streams, human streams and military power – without anyone understanding, or being in control of what is happening. The billions of interactions between knowledge and nonsense give the world an apocalyptic atmosphere.

Is a new growth in the global society a growth in the space in between, a growth in refinement? Could it be that the individual person in all their infinitely fine nuances could find meaning in these great artworks– in a world that is beyond measure?

Among the infinite harmonies to a single tone, in a particular work, played at a certain time, a harmony is found that creates a sound, a timbre, a rhythm in the substance which opens a dizzying path into the eternity at the centre of the world. There is such a path in the middle of Carl Nielsen’s Symphony No. 4.  It is the same giddiness felt by a carpenter when they run a hand along the edge of a piece of furniture and know that is just how a curve should be: beyond measure. 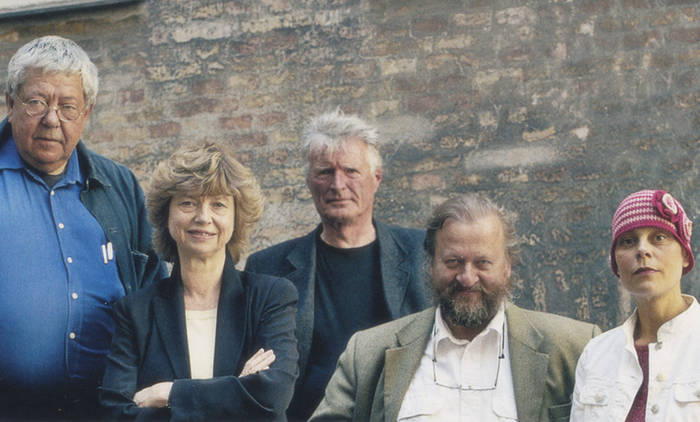 See all the works in the canon for Visual Arts

The Trundholm Sun Chariot, Approx 1300 BC

The Union Master performed several murals in the period 1410-1440

Jason with the Golden Fleece, 1828

A View Through Three of the North-western Arches of the Third Storey of the Coliseum, 1813-1816

Sunbeams, or Sunlight. ”Dust Motes Dancing in the Sunbeams”, 1900