By the Committee for Literature, 2006

Standing at the edge of a forest, a stag is magnificent. However, if the motif is found on a cloth slung over the sofa, it is a banal representation of a nature that the image definitively is not. ‘The edge of the frame is the picture’s strongest impact’ wrote painter Harald Giersing. The boundary between art and non-art, expressed by the individual work, was rediscovered by Giersing in the boundary between art and nationality: ‘Good art is always national. National art is always poor’.
The literary canon thus encompasses works that in this context are ‘good art’. It is not compulsory or to be force-fed, but an offer to the entire population to experience valuable literary works. It provides a common language for most, so that we can take a step back from old habits to rediscover our curiosity, to be inspired to deeper study and to test our quality standards. It does not simply give us familiar quotations and speech bubbles. It puts words to the entire spectrum of emotions, to experiences, to opportunities and to places we can only reach in our fantasies. Danish language. Good literature often obtains inspiration across boundaries between language, nationalities and cultures, and therefore literature is an excellent tool for making the strange familiar and the familiar even more remarkable.

It is easy to see that canonisation involves a risk of cementation and holding onto tradition. However – just as takes place in any museum – is this articulation and denaturalisation of the past only the beginning of progression whilst retaining the strength of tradition
Committee for Literature

The literary canon encompasses works that appeal to the individual’s love of reading, works that in all their innate differences provide places to converse from and about. They are necessary in a complex society where many different roles and identities are found. The works have no cut-and-dried solutions to personal and societal problem issues; however, they describe people in many time periods and culture forms that we, in our time, can view through and see our own reflections.

The Canon Committee for Literature’s work in selecting just a few literary works in an 800-year scope of literature has, despite the members’ differing backgrounds, been less taxing than many had anticipated. Many will perhaps lament the lack of surprises on the list; however, it is also a point that the selections in the literary area are presumably less controversial than in areas where the education system is more remote. The committee has not found any hidden or displaced literary gold nuggets that could give the list headlines in the news media. Despite the fact that Danish literary history is not lacking in unreasonable superlative and disparaging assessments, these are however secondary when the task is simply to find 12 works.

The starting point for our selections has been that taste is open to discussion. We have highlighted works that have proven to be durable in the cultural tradition. Among these we have selected works that each and every one of the committee members in part finds is of high artistic quality, and in part foretells the future as vivid and valuable literature. The criteria also include tradition, experience and durability. Against this background, we consider all of the selected works to be important contributions, both to Danish literature and to Danish culture in a broader context. They are the results of an original and bold artistic effort that is also of significant value. They are worth preserving for posterity as they provide reference points in a modern globalised knowledge society.

The works on the literary canon list:
• is of high artistic quality
• Predicted a future as living and valuable literature
• Represents tradition, experience and durability
• is created by original and bold artistic efforts
• Provides reference points in a modern globalized knowledge society

Danish literature is rich and diverse. Fortunately, there is such a wide range to choose from that we have not had to forsake quality in order to accommodate varying eras and text forms. New readers can begin here; however, this is not a complete or conclusive curriculum. The works that have been included in the canon list can – despite their diversity – cannot at all claim to be a compact, miniature version of Danish literature. Many highly qualified texts and authors are not included. Behind the selection of individual works there is thus no dismissal of other Danish literature to a lower ranking. It has not been possible, however, to treat the genres equally. Some lyrical poetry has been accommodated as part of an anthology, and we have had to reject the inclusion of essay works, despite the fact that these also have an important place in literature and culture.

That ‘the edge has the strongest impact’ is also true of the canon list. The premises are quantitative, involving arbitrary demarcation, by nature of the requirement for 12 works. The list does not simply function as a highlighting of ‘the good’: the result is also absolutely a process. It can raise a discussion, in part due to the individual selections in relation to other possible candidates which in one way or another are of the same type, in part due to the criteria applied in our evaluations of literature, and in a broader context our cultural heritage. The list is thus not only designed to generate debate, but also an attempt to qualify the debate.

If the Canon Committee for Literature had been any different, the result would likely have also been different. Equally apparent is that a canon such as this should be continually revised and supplemented. However, this is not a reason to refrain from highlighting the creation of this canon, which every reader, teacher and literary person in any case contributes to every day through choices and rejections. The problem is not in the highlighting itself but rather in what is selected and in particular who selects and thereby gives legitimacy to a work. The most important question is why is something canonised. It does need to be to defend something (Danish literature is likely to be fine for now); however, canonisation will often be based on the desire to offer guidance. It is easy to see that canonisation involves a risk of cementation and holding onto tradition. However – just as takes place in any museum – is this articulation and denaturalisation of the past only the beginning of progression whilst retaining the strength of tradition? It is an information project on which work has been carried out – not least in Europe – for quite some time, and, as the poet J. P. Jacobsen said in his watchword: ‘Bless our country/This, our desire –’.

Note: Both Giersing quotes are from the same edition of the periodical Klingen. J. P. Jacobsen is quoted from Juleroser, 1885. 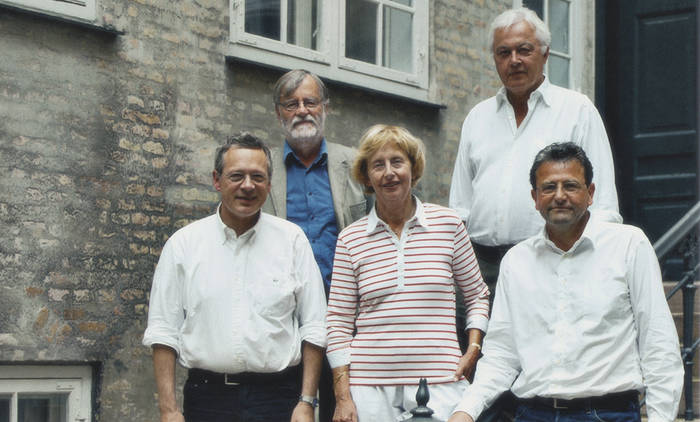 See all the works in the canon for Literature

Poetry Anthology, From middle ages til 1985