Canon for Design and Crafts

At the end of the 1700s, the painter Abildgaard was absorbed in furniture design. He designed a number of items of furniture; however, his most significant work was his Klismos chair, inspired by the chairs he had seen depicted on Greek vases. Abildgaard designed his furniture, interiors and his tiny villa Spurveskjul based on an ideal perception of the good life. There were several good reasons for this: The Art Academy, at its foundation, had been given the task of assigning and authorising masterpieces from craft slaves, and the general consensus among artists was something needed to be done with all the useless rubbish being produced. Abildgaard was, in line with the international avant-garde of the time, interested in the world of antiquity, which he imagined to be simpler and more genuine, and he wished to reflect this ideal in his designs. As Abildgaard was a painter, colour and narrative played a major role throughout his life works.

You can think of each work as a hyperlink, providing access to a complete network of thoughts and ideas
Committee for Design and Crafts

Each individual work has a connection to many other works – not only within the same art form, but also within very different forms of expression. You can think of each work as a hyperlink, providing access to a complete network of thoughts and ideas. From Abildgaard’s chair, you can see a link to the wider world: to antiquity’s literary principle works, to the paintings in Pompeii and Herculaneum, to Abildgaard’s other works, to Poussin, to generations of art design furniture, to the everyday Klismos chair that became so common in the 19th century, and to the new classicists that in the 1920s founded the basis for ‘Danish Design’ – the generation of furniture architects that have been rediscovered internationally as a result of interest from a handful of British architects. If one was to have perhaps a little more imagination, one could also link to Jørgen Rasmussen’s Kevi wheel, as this was a continuation of the academic tradition for design that Abildgaard introduced to Denmark. From the Kevi wheel, we could go further out into the world; however, that story will have to wait.

In the committee for design and crafts, we became quickly aware that there were hundreds of undeniably eligible works within design and crafts that were each on a level with the best in the world – that otherwise were incomparable. Which one is best: a stone axe, the Gundestrup cauldron, ‘Myren’ or ice cube bags? Wegner’s chair or the Christiania bicycle? But we had to choose. The 12 works that we have selected each tell a part of the history of design in Denmark; however, there are enough works out there to form many more canons. We could have said something about the good craftsmanship, innovation, peasant culture or merely about Thorvald Bindesbøll. Design and crafts is an extremely broad area: we could have created a canon for each of the design trades represented: graphic design, textile printing, weaving, ceramics, furniture design, clothing, jewellery art, glass, industrial design, games design, web design, component design and many more.

From our first meeting, we have only been certain about one thing: Poul Henningsen’s light fixtures had to be part of the canon. This gave us an excellent opportunity to learn more about PH’s life and thoughts. It is remarkable that the ‘canon’ or ‘good taste’ that is presently found in Denmark was created by Poul Henningsen and his culturally radical associates in a rebellion against an age that clung fast to the image of a long-gone feudal superpower. In many articles in newspapers and the periodicals Kritisk Revy and Tænk, in books, revues and the fantastic ‘Film of Denmark’, PH sought to take stock of the old Denmark and embrace a new potential Denmark that was better in keeping with modern circumstances. His spiritual fathers were the Brandes circle, who also fought for a ‘modern breakthrough’. For both generations of cultural radicals, everyday objects played a significant role. It was first around the year 1900 when art and crafts and artisan production of furniture and objects came into focus; later, from 1930, it was industrial design. And it was exactly because of the lamp system that PH knew better than anyone else what industrial production meant.

This was only partially successful in bringing Denmark into the industrial age, despite the efforts of ardent cultural radicals. And now it is too late. The industrial age has passed, and Denmark never became a leading industrial nation.

We are now faced with new circumstances, and dare not, as a nation, take the step into the reality we already have: with super-modern technology, Internet, HTA, outsourcing of production and demands for education. We must learn to relate to other lifestyles, new working conditions and new forms of production. So it is rather appropriate that we once again take a look at the objects around us to see whether they correspond to our actual lives and needs. And in this context, it is good to look at history in a new light: We have an unending richness of experience and knowledge that we can draw on, and it is by no means certain that the interpretation of history that was appropriate in the 30s is still appropriate today.

The works in the canon:
• are 'open works'
• represents diversity
• are relevant in the time they are created
• Has international qualities
• is created, either by Danes abroad, or foreigners in Denmark

In the Canon Committee for Design and Crafts, we have selected 12 works that are exemplary in being relevant to the period they were created, and so future-oriented that they still have utility and recognition value today. We have only selected works that are also significant in an international perspective.

Design and crafts are actually processes, a way of doing things – and in the work with the canon it has become apparent to us that the traditional skills of craftsmanship and design still play an important role. IT people speak of programming as a form of artwork and we can recognise their interaction with the material from the oldest craft traditions: just as we can recognise ourselves in what we see in the stone axe, we can recognise material in the codes that form the new digital image of the universe – whether it is woven in cloth or in digits does not really matter.

Each work points forward to an entire family of works, just as in the case of Abildgaard’s chair at the beginning of this text. We hope that this small collection of works can inspire many conversations about the objects around us, both now and in the future. 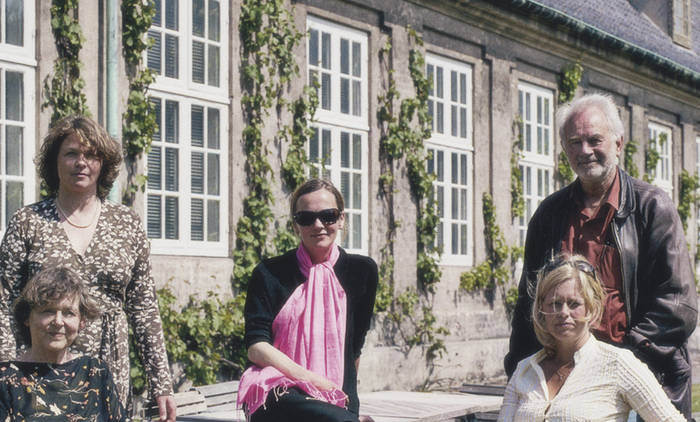 See all the works in the canon for Design and Crafts

PH’s lampshadesystem, from 1925 and still in development

Chair made of foamed polymer, 1964